Japanese illuminated narrative handscrolls (emaki) are distinct in their materiality. Consisting of alternating script passages and paintings that unfold from right to left, emaki have a horizontal orientation and an oblong format that sometimes covers up to dozens of meters. Based on previous pivotal reflections on the digital conditions that have spurred new perspectives in the history of European art, this project further examines the specific problems and challenges in re-/presenting Japanese handscrolls, involving not only book publications and museum rooms, but also website interfaces and computer screens.

Centering on a 1538 set of six such handscrolls entitled Karmic Origins of the Deity Dajō Itokuten and housed in the Musée Guimet, Paris, this dissertation project investigates the history of re-/presentations of Japanese handscrolls. The methodological approach is to construct a cultural biography of the set of scrolls from 1) its initial creation to 2) its re-/presentations in museums and conventional publications and later 3) in its online digital representation. 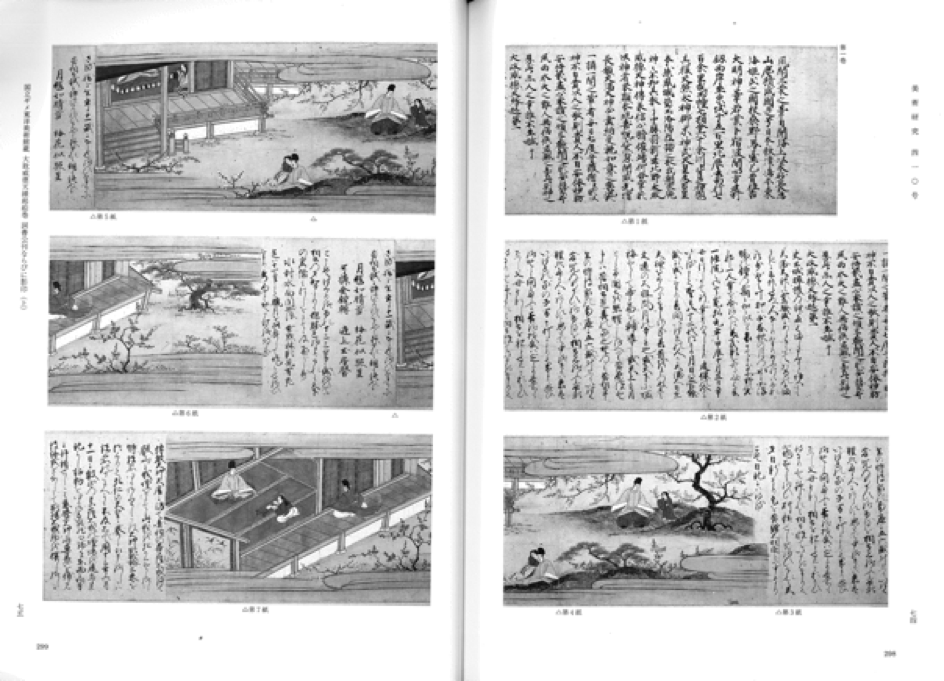 A conventional representation of handscrolls in the book form of an art historical journal. Limited by the size and layout of the pages, the oblong scroll is cut up into short segments. It results in the fragmentation of sections of scripts and paintings. There are overlaps in the consecutive images to indicate the disrupted coherence.

The project underscores and examines the way problems and challenges in re-/presenting Japanese handscrolls have persisted from the so-called “analogue times” until the so-called “digital age.” The inquiry focuses especially on the way in which the advancement of various technologies is intertwined with the development of art history as a discipline. When modern art history was introduced in Japan in the late nineteenth-century, the need arose, and attempts were made, to represent artworks in reproductive media such as periodicals, lantern slides, and also to present them in museum spaces. Problems occur especially when the media, formats or basic layout principles that originate from the early European practices are thought to be universally applicable and are used without adapting them to the particular challenges of the East Asian materials. 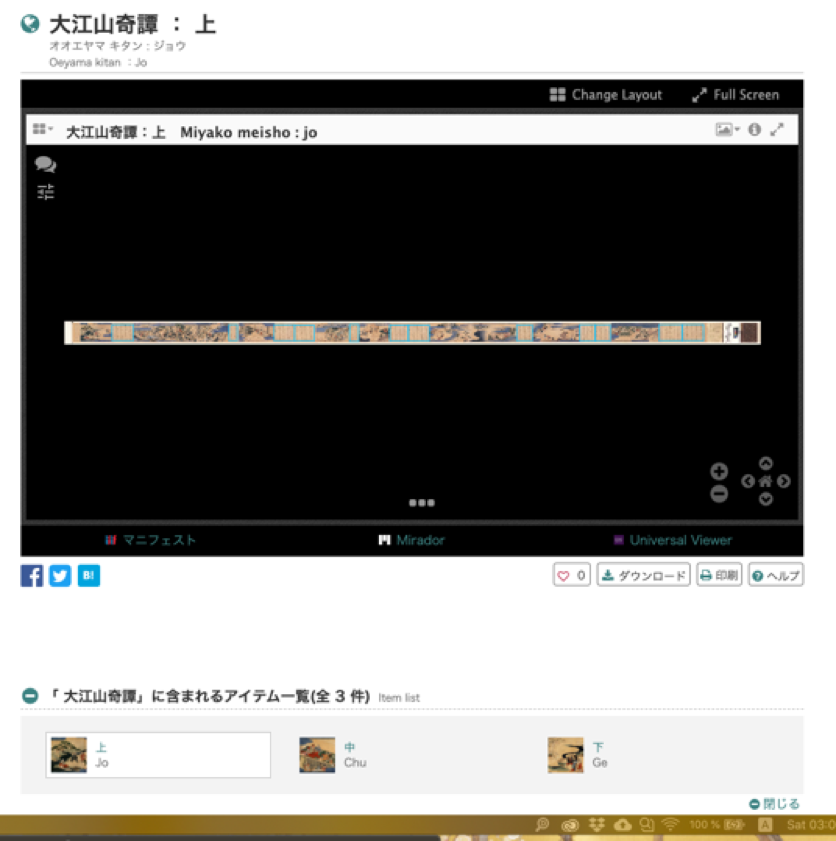 An example of digital representation of East Asian handscrolls on websites. Despite of its long format, the whole scroll is treated as one single image in its default view, centered in the view window, and shown in its entirety — not an ideal way to look at a handscroll, but a standard approach to an individual oil painting.

Scroll I of Ōeyama kidan, a set of three scrolls, as is presented on the website of Bukkyo University Library Digital Collection.

Based on East Asian, in this case specifically Japanese, materiality and practices of both viewing and hermeneutics, and by scrutinizing the extant digital projects on Japanese handscrolls, this project critically reflects on the mediating power of the digital image and explores new modes of digital representations of Japanese handscrolls in three areas of inquiry: 1) materiality, 2) practice, and 3) locality.

1)  Materiality refers to both the material qualities of the artefact and the handscrolls’
oblong format. The aim is to explore the possibilities and limits of digital technologies in conveying to, and informing the user about, elements “un-/presentable” in digital forms. Despite the drastically inflated amount of visual information that comes with higher resolution, tactile information such as the weight of the artefact, the distinct paper quality, the physical pigments of paints, etc. will inevitably be omitted in the flattened visual representation of the digital image. The project will discuss potential ways to highlight, convey and translate these “unpresentable” aspects to the viewer.

2)  Practice concerns the way in which handscrolls are handled and viewed, and how a digital representation retains, artificially augments or transforms the ocular experience.

3)  Locality includes both the original location of production and the current residence of an artefact. It is also concerned with a) networks between the locations of related objects, b) the socio-political significance of the artefacts at their locations and within these networks, and c) the mobility of the artefact, and the subsequent changes of such significance across time. The thesis will examine various possibilities of mapping such networks with digital tools. 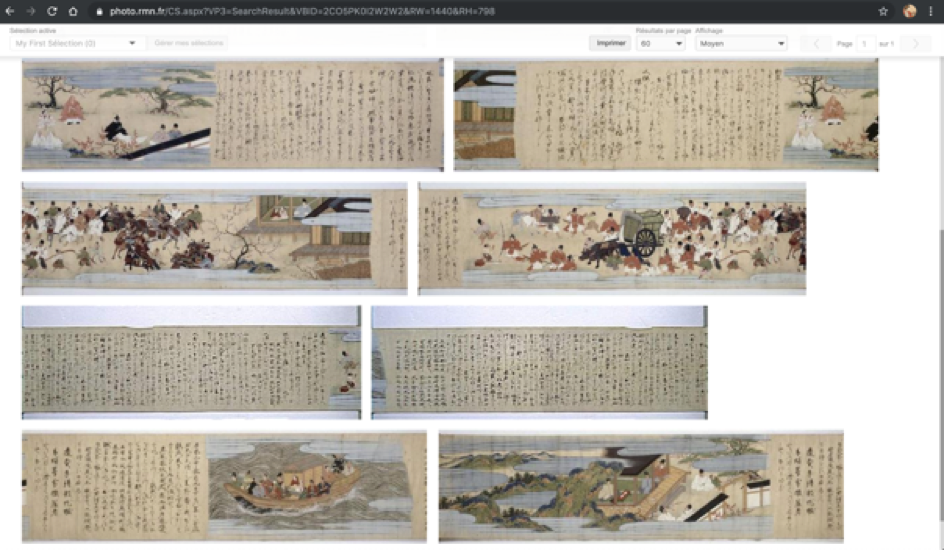 An example of the digital representation of Japanese handscrolls on websites. A few thumbnails of one scroll from the Guimet set are shown in this search interface. The whole scroll is, again, cut up into segments to accommodate the formats of website interface that scrolls vertically and of rectangular computer screens. Despite of the scroll’s orientation that is always read from right to left, the cut-up segments are arranged from left to right, according to the European typographical convention, which further disturbs the reader’s perception of the scroll’s original configuration.

The beginning of Scroll III of the same set of Guimet set of the Illuminated Handscrolls of the Karmic Origin of the Deity Dajō Itokuten. Reproduction on the website of the Réunion des Musées Nationaux.

Subsequently, building on the results of the above inquiries, the project discusses the potentials of future digitization strategies, in the hope that the flexible and reproducible nature of digital images and tools can enhance, augment and facilitate different ways of viewing and virtually handling handscrolls.