“Impeached Forever.” Reflecting upon Trump’s Presidency in Terms of Social and Media Criticism

The next few days will set the future course for the United States, and consequently for the rest of the world. Amidst a worldwide pandemic, the 2020 election will make history for a deeply divided nation. Now seems like the perfect time to reflect upon the past. How can a picture practice analysis help us understand Donald Trump’s presidency, as well as its critiques? In the following, this is what I will discuss by analyzing the internet meme Trump in Peach.[1] 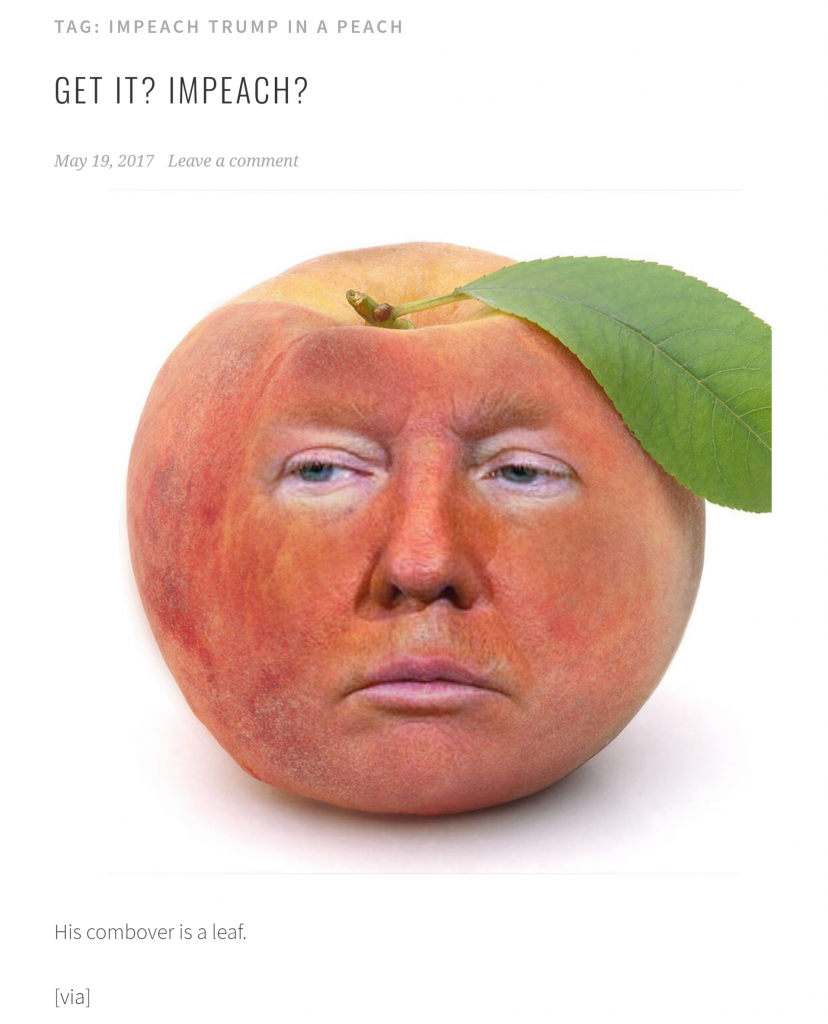 Analyzing the Knowing That: Social Criticism of Trump

The internet meme Trump in Peach was shared on Tumblr for the first time in 2017. The creator of the internet meme remains unknown. However, it is TV writer Sam Jarvis who reblogged it on her website shortly afterwards.

The internet meme is pictorially referencing Donald Trump’s impeachment inquiry. His head is transformed into a peach. Translating the picture into verbal signs, it means literally “Trump in Peach”, which sounds like “[to] impeach.” Jarvis is stressing this phonetic similarity by commenting the picture with “Get it? Impeach?” and pointing out Trump’s “combover” that “is a leaf.”

In May 2017, when the internet meme was posted, Trump’s impeachment was not yet formally instigated. Nevertheless, people were discussing it – in fact, even before Trump got into office. When Russian hackers infiltrated the Democratic party’s headquarters in June 2016 in order to obtain defamatory data against Hillary Clinton, Russiagate was born. Trump was accused of being aware of this electoral manipulation, or even being involved in it.

It is in this context that special counsel Robert Mueller investigated against Trump from May 2017 to March 2019. During his investigation, Mueller documented several cases of obstruction of justice. The only reason Trump was not prosecuted by Mueller was that Mueller had no jurisdiction against Trump: only the Senate can try an acting president.

This GIF was posted on Tenor.com on 10th February, 2020, five days after Trump was discharged by the Senate in all counts. His not-guilty verdict appears more surprising than it actually is, because it was politically motivated by a Republican-ruled Senate. It was not based on Trump’s actual innocence.

In this GIF, critiques of Trump pictorially criticized his not-guilty verdict. In terms of social criticism, it expresses that Trump is actually guilty and only slipped through the loopholes of the legal system. De facto, Trump was not impeached, but in the eyes of his critiques he is at least “impeached forever” in this internet meme.

The GIF gives a hint on what photograph Trump in Peach is based on. According to my research, the photograph was used for the first time in an article of The Atlantic in 2016. In this article, Dan P. McAdams psychologically analyzed Trump’s personality and a future presidency that would be “marked by ambition, deception, anger, and narcissism.” The photograph was probably taken at the primaries in Iowa in 2016 – which Trump has lost against his competitor Ted Cruz.

However, the GIF set us on the wrong track. A reverse image search with TinEye shows that the photograph is actually not the photograph taken up by the internet meme. My self-attempt, which I will elaborate below, gave further prove to this suspicion.

The reverse image search also found the actual photograph the internet meme is based on. It is a picture taken by Steven A. Henry in 2010. In this picture, Donald Trump is posing on the red carpet at a premiere of this reality show The Apprentice. Getty Images is selling the photograph for 475 €. It stands to reason that the meme maker did not pay this amount. Usually, when stock photography is used for memeing, the preview picture with the watermark is demonstratively used. This is not the case here.

By looking for other sources the meme maker could have used, I came across the Tumblr blog Feminist? Fuck Yeah!, which posted a screenshot of an article by The Onion, which in turn is featuring the photograph used in the internet meme. The said article is comparing Trump to “a festering pile of shit.” The screenshot was posted in 2015, several months after Trump declared he was running for president, which indicates that the photograph used in the internet meme already circulated on Tumblr before it was memed in Trump in Peach.

Analyzing the Knowing How: Media Criticism of Photo Lab and Getty Images

Obviously, Trump in Peach is photoshopped, an operation which could be performed by an experienced user. However, this is not the case here. In my image inquiry, I was also looking for the origin of the peach picture. In doing so, I found out that peach faces like Trump in Peach but without Trump’s face were already circulating on social media. A watermark on one of the pictures indicates that these pictures were made with the AI-based app Photo Lab.

In this app, the filter Peach Face can be easily used to create an image like Trump in Peach. Only a few steps are necessary: the first step is to upload a picture or search one in the database, e.g. one of Donald Trump. Via the search engine, I eventually found the photograph used both by The Onion and the internet meme. I selected this photo, cropped it and had it processed by the algorithm. The result was in fact Trump in Peach.

But what is actually media critical about this process, you might ask? At first, it seems like a usual usage of a filter, which are deployed en masse on social media every day. Yet, I argue that this is exactly the difference with Trump in Peach.

Photo Lab is an app intended for everyday use. On their website, it is described as follows: “Photo Lab began turning usual photos into something stunning years ago. And it is precisely what the app keeps doing now, only with the most advanced AI-driven technologies under the hood and the most creative designers behind the scenes.”

Photo Lab and especially the face filter Peach Face is not designed for political protest. By contrast, Trump in Peach is translating the trivial into the political. Suddenly, the peach is not just a peach with a face anymore, but is semantically charged with political protest, which is aiming at Donald Trump’s impeachment inquiry.

Arguing with Noam Gal, Zohar Kampf and Limor Shifman, Trump in Peach is a parody, “designed to imitate the other’s style of expression in order to mock it.“ In this vein, the peach faces of Photo Lab are imitated in order to semantically transform them. In doing so, media criticism addresses of the triviality and everydayness of these face filters, which can be subversively used for expressing social criticism.

It is a critique of the media conditions themselves, which exposes what is made possible with the digital image. In addition, the photo agency Getty Images, which seems to be powerless against the uncontrolled circulation and appropriation of Trump’s photograph, is tacitly criticized as well by the internet meme.

Conclusion: Comparing the Media Knowledge and Identifying the Picture Practices of Trump in Peach

At this point, social and media criticism are intertwined. To impeach Trump by “in peaching” him is only possible by subversively using Photo Lab and appropriating Trump’s photography for political purpose.

What has become clear by now is that social criticism of Donald Trump is expressed rather explicitly, while the media criticism of Photo Lab and Getty Images is conveyed tacitly. This performative media critique should not be neglected while studying the more obvious social critique.

Despite the outcome of the election, the next weeks and months will bring lots of new political internet memes that can and should be probed in accord with pictorial picture critique – including social as well as media criticism.

[1] This blog post is based on the talk Imitieren, Editieren, Parodieren. Zu den medienkritischen Praktiken politischer Internet-Memes that I gave at the symposium of the Darmstadt Photography Days 2020.