“Stocking Is the New Planking.” Case Studies on the Picture Practices of Stock Photography Parodies 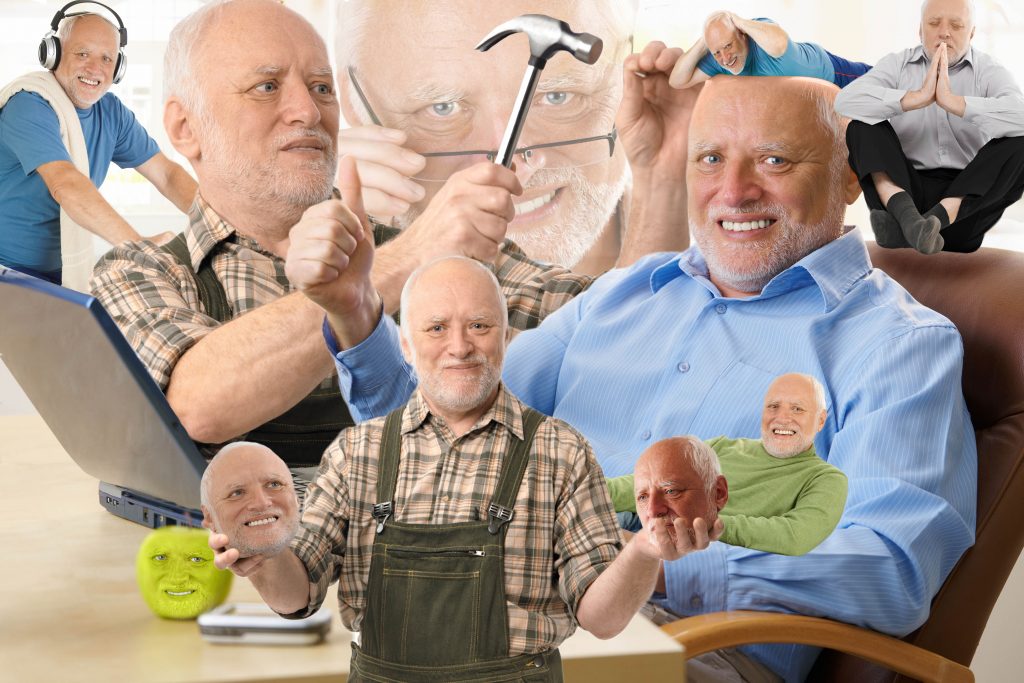 Stock photography is widely used in marketing, public relations and journalism – all fields that are heavily depending on social media for coverage. These now digital images are photographs that are in stock, i. e. shot beforehand and sold by stock photo agencies like Getty Images for good money. In professional media fields, they are commonly used to symbolize situations (journalism) or to sell products/brands or rather feelings (marketing, PR).

Stocking, in turn, is a user-generated parody of stock photography. Similar to other so-called photo fads, stocking is performed by social media users as a challenge to imitate silly stock photo poses as creatively as possible. In a way, stocking is the new planking, but instead of mimicking planks, users are “trolling the photo agencies” with their own images. Below, I will analyze two examples of stocking in order to get a better understanding of the picture practices and media knowledge.

Analyzing the Knowing That

The left picture shown above is a stock photo on iStock, a subsidiary company of Getty Images. This can be deduced form the displayed watermark. The photo was shot by the Canadian photographer Michelle Gibson. Although the photo is dated on iStock to 2013, it had to be uploaded and licensed once before because otherwise the parody could not have been possible in 2011.

Nevertheless, the photo is described on iStock as follows: “Business Man puts his head into a recycle bin at work”. Depicted is exactly this: a bald man wearing a shirt, sticking his head into a recycling bin. This picture comes from a whole series of photos, in which the bald business man is posing weirdly (e. g. “with a recycle bin over his head”). Semantically, these photos are just about recycling at work.

Analyzing the Knowing How

The picture on the right is an imitation of the stock photo. This imitation is achieved by using the right properties and location. The imitator, also balding, is posing with his head into a similar locking recycling bin. Instead of a shirt, he is wearing a polo shirt. To complete the imitation, the photo is reenacted in an office, which can be deduced from the copier in the background.

The description of the imitation actually is similar to the stock photo: “Man finds quiet moment at work by sticking head into recycling bin”, but with an ironical undertone. In contrast, the tags used are quite uncritically (i. e. “Green” or “Table”) and could be taken right from iStock. The pictorial picture critique addresses the absurdity of stock photography, and tacitly questions why such photos are produced and sold. Because the stock photo is exaggerated from reality, far away from actual office work, the picture becomes memeable. The second case study will explain how an actual internet meme is born from stock photography.

Analyzing the Knowing That

The parodied picture, shown above, refers to a stock photo uploaded to and licensed by iStock in 2010, described as follows: “Portrait of sporty senior man with exercise ball, looking at camera, smiling…” The picture is showing a senior, who is leaning on an exercise ball with a towel over his shoulder.

This man, who is pictured in the stock photo, will be known on the internet a few months later as Hide the Pain Harold. András Arató aka Harold is a “stock photography model whose facial expression appears to indicate suppressed pain and/or discomfort.” His prominent and relatable facial expression expresses that he tacitly does not want to be in this situation, in which he was photographed – in this case the gym. At the time the imitation was uploaded to Tumblr, András Arató was not known as Hide the Pain Harold yet. His meme name was given to him approximately one month later on the platform Facepunch.

Analyzing the Knowing How

The imitator, seen on the right, adopts the same pose as András Arató by using an exercising ball and a towel as props. But instead of being a bald senior, the imitator is a young man with full beard and hair. Therefore, the imitation is not produced by the likeness of these two pictured persons, but by the actual practices of posing and decorating. What remains the same is the artificiality of the forced smile.

In this case, the pictorial picture critique aims at the inauthenticity of stock photography, which is presumably not less staged than the reenactment. András Arató became an internet meme because he is indicating – in terms of Goffman – with the expression he gives off the inauthentic backstage of stock photography. Maybe his forced smile also points out the payment actors of stock photography receive – or rather do not receive – in contrast to the revenues stock photo agencies actually generate. In this vein, the captioning can be understood ironically since “Exercise Ball, Yoga Mat, and Towel Convey Vitality” but not wealth.

Conclusion: Comparing the Media Knowledge and Identifying the Picture Practices of Stocking

Stocking is a social media practice that ridicules stock photography. Therefore, stock photos are recycled and imitated by the users shown in the curated juxtapositions of the Tumblr blog Stocking Is the New Planking. That means that users participating in stocking are appropriating photos from the original context, i. e. stock photo agencies, and putting them in a new context, i. e. Tumblr. This is the basic principal of memeing, but becoming an actual internet meme means a constant circulation or – if you will – serialization of these digital images.

Ironically, the watermark is not protecting the photo from unlicensed reuse. In fact, it is an indexical reference to iStock – the object of criticism. Thus, stocking critically addresses the licensing and monetarizing of digital photography by monopolized stock photo agencies like iStock and Getty Images, respectively. Hence, the users are not buying the photos but rather demonstratively appropriating the watermarked preview picture.

On the other hand, the second case is demonstrating that by recycling images new ones can be created, which are eventually becoming internet memes. According to the encyclopedia Know Your Meme, András Arató was made a meme on Facepunch for the first time. However, our research shows that he was already the object of memeing one month before that. Therefore, his picture on Tumblr can be understood as the beginning of a long running meme life cycle.

Hide the Pain Harold has become the prototype of stock photography parodies on the internet. Ironically, András Arató became internet famous and contracted for paid advertising, not because of his stock photo career but rather because of the meme culture that is reusing his images to this day (see for example an interview by Know Your Meme in 2020).